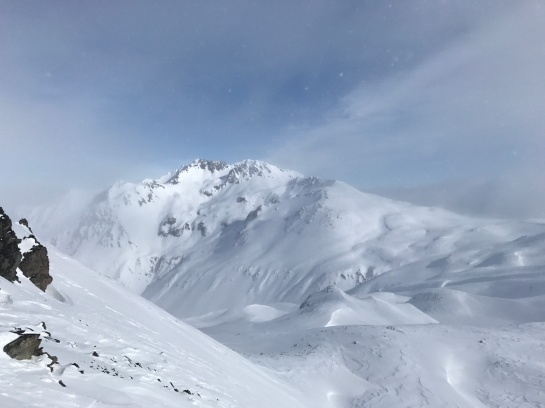 Avalanche conditions have had a fair amount of press lately. After I accidentally triggered two large slides outside Porters on July 18, most local snow safety workers got talking. Thinking and talking about avalanches and snow has taken up a lot of time lately.

Yesterday (August 2) I went for a tour with Craigeburns forecaster Brad Carpenter and Cait Hall, Cheeseman patroller. Our aim was to get further afield and look at the snow conditions and monitor the PWL. We set off from Cheeseman ski area in mist. Annoyingly, a flick of SE mistiness was to stick with us, preventing decent visibility.

I wanted to get an idea of snow depth and distribution now that we’ve had 3 decent storms. A persistent weak layer – in this case, depth hoar, can stick around for weeks or even months. Ideally it would be flushed out by a big rain event and subsequent freezing of the pack, but that has not occurred extensively yet. We’ve had some light rain but not enough to make a significant difference. The other option is that the layer becomes buried by subsequent snowfalls. Yet not enough snow has fallen – the weak layer is still only 50-100cm deep. The weight of a single person can trigger a failure in a weak layer that is 100cm or less below the snow surface, depending on the strength and resistance of the layers above it. We can see light through the trees but we are not yet out of the woods.

The snow pack has gained strength thanks to additional snow fall and warmer temperatures but the weak layer of depth hoar and facets still lurk beneath. No longer will the weight of one 60kg lady wearing a pack, remote trigger slides from 50 metres away – but slides could still be triggered by the weight of one person! It’s tricky.

I have had my probe out a lot on recent outings. I use it to gauge the depth of snow and to feel for the weak layer and whether this weak layer sits on a crust (sliding layer). Generally I’m finding the snow pack to be 50-100cm deep. It’s deeper where the wind has distributed snow near ridge lines and is thinner below the ridge lines (in the start zones). This means that you are more likely to trigger an avalanche once you are well off the ridge. The thin snow pack means that you could still easily trigger the weak layer if you stray into the wrong spot.

As the snowpack gains strength (and it has), the chance of triggering an avalanche become less but the consequences remain the same – the slide could propagate widely and entrain a lot of snow. The uncertainty is still high in my mind – I cannot be certain that I would not trigger a slide on any upper elevation slope approaching 35 degrees and steeper. If we got a large amount of precipitation (snow or rain or event wind), all bets would be off as this would overload the weak layer immediately.

Here are my recommendations for safe backcountry travel this weekend:

1. Only go if you understand what a weak layer looks like and how it behaves (i.e. you know how to do effective tests).

3. Let someone know where you are going and carry rescue gear. Practice your transceiver searches.

4. Dig and probe to get an idea of the snowpack depth and conditions before you drop in. Do this in a safe, representative area if possible.

5. Choose to ascend or descend slopes that are low angle (less than 35 degrees) or well supported. Avoid shallow rock rollovers and slopes with poor run-outs (terrain traps and cliffs).

6. Follow strict safe travel protocols – one at a time and eyes on each other throughout the run.

7. Remember that tracks on the slope don’t make it safe. That person may have just missed the deficit spot – that point on a slope where an avalanche is most likely to be triggered.

In times of uncertainty you need to have wider safety margins and be stricter on how you travel. Yesterday, we kept to ridges for the uphill travel and chose lower angle lines for descents. We skied a low angle line off Mt Cheeseman into the Ryton and kept eyes on each other as we skied from the summit ridge to an island of safety on the first bench. Shallow snow on a western aspect gave us safe passage into Waterfall basin. There, we chose the lowest angle line that was not attached to anything steeper above, and skied one at a time from high point to high point until we were below the 1700m contour. After that it got icy and the hazard changed from avalanche to a sliding problem. Such is life in the Craigies!