Touring Choices are many

On a recent Craigieburn Haute Route all five of our guests had frame bindings (mostly Marker Dukes and Barrons) while I toured on tech (Dynafit Radical ST) and Stu holds loyal to telemark bindings. The frames worked well for these big guys. On ascents that were better suited to hiking than skinning, pack weights increased dramatically once the guys put their skis on their packs and several of them mentioned tight hip flexors as the days rolled on. Once 20cm fresh arrived at Mt O however, the guys were sorted for maximum downhill excellence.

Although my chosen touring rig is to use Tech bindings (Dynafit) I have a set up with a pair of Marker Tour lite frame bindings. I have to use touring bindings as my Dynafit ski boot soles are only compatible with touring binding(whether tech or frame). I keep my beefier Marker tech bindings for ski area skiing and side country only – dipping out of bounds for a short tour then heading back inbounds with a less than half hour skin. I avoid putting these bad boys on my back as they are far heavier than any tech binding I own. In the 90’s I toured exclusively on telemark bindings and did all my BC guiding on teles but gave it away once telemark gear became heavier than AT (alpine touring) gear. I’m not a fan of a big quiver of skis – my preference tends to an all purpose ski. I tour more than I ski the ski area. I don’t fall very often. My boot choice (I don’t own downhill boots), the amount I tour (80-90% of my skiing) and my stability (or timidity – call it what you will) are perhaps the biggest factors defining my binding choices.

I looked to http://www.outdoorgearlab.com/topics/snow-sports/best-at-bindings for a solid review on the pros and cons of tech and frame. If you’ve got the time and interest, check this extensive article out. There’s an excellent graph ranking all kinds of touring bindings. Otherwise stick with me for the condensed version:

Tech
Tech bindings use “pins” that slot into metal lined holes near the toe of your boot and feature a heel piece that never leaves the ski. Depending on the brand the heel piece is manoeuvred to allow the heel to release for uphill skinning. Most tech bindings have brakes (or at least the option to add brakes). While they look frail, they are actually super strong. I’ve seen only a few break and that’s often due to many years of wear or incorrect use.

Advantages:
Weight – often around half the weight of the average frame binding.
A more efficient pivot point at the toe, meaning you can stride more naturally while skinning, resulting in energy saved. Additionally, you are not lifting the weight of the frame with every step as the binding stays on the ski (unlike the frame where the binding lifts with the foot) = way easier trail breaking.
The user does not need to step out of the binding at transitions from skin to ski and vice versa.

Disadvantages:
Tech style bindings are typically harder to get into, especially in softer snow or on ice (ie. they take some getting used to but generally less than a day).
They require a specialised boot with the aforementioned metal-lined holes for the pins.
They are durable but typically not quite as beefy as many frame versions.
They are more expensive than frame bindings.

Upshot: Because of their weight and efficient stride, they are the best choice for backcountry users who tour on their setup more than 50% of the time. The primary disadvantage that comes from a lighter binding is that the bindings feel less damp on firm snow – an easy trade off when you skin for hours to get to that firm snow, or a poor trade-off when you take a lift or a helicopter to get there. Another trade off for most tech bindings is that you will need a boot with “tech fittings” and you will almost definitely not be able to use your downhill boots in them – meaning it’s harder to financially “ease” into the transition of purchasing a touring setup. It’s also worth remembering that tech bindings are not designed for hard-out inbounds skiing and that too many ski area days will eventually wear the binding out.

Frame
Frame bindings feature a metal structure (hence the term “frame”) connecting the toe and the heel piece of the binding that can be freed for touring, and locked down for skiing.

Advantages:
A. Safety: They are arguably marginally safer due to their releasability – both on ascent and descent.
B. Downhill: For primarily in-bounds focused skiers, their greater mass, while heavier for the way up, means superior dampness and performance on the down. The firmer the conditions and the greater the speed, the bigger to advantage to frame style.
C. Boot compatibility: Most frame styles work with downhill boots and are easier to get in and out of.

Disadvantages:
A. Weight: Frame style bindings look more like a traditional downhill binding but feature some sort of “release” that frees your heel to allow you to tour; this means that with every step, you are picking up extra weight because of the binding.
B. The pivot point (with the exception of the Fritschi Freeride Pro), is also typically not as efficient. On a long climb you’ll tire quicker, something that is even more noticeable on flatter approaches.
C. Weight: Frame styles are often about 50% heavier, but sometimes even greater compared to their tech counterparts.
D. Transitions: The Marker bindings require the user to step out of the binding at any skin-ski transition.

In New Zealand the most commonly used frame binding would be the Marker Barron or Marker Duke, although I see a few Fritschi Diamir and newer Atomic frame bindings around as well. These are a popular option for the skier who only busts out a few skins each year. Almost all ski tour guides use tech bindings. We are in it for long-haul protection of our hip flexors – the area to feel the greatest strain from many uphill steps with a heavy binding. Another problem spot in terms of weight are the shoulders and back if carrying your skis for any period of time.

Outdoor Gear Lab puts it succinctly when they state that a tech binding tours significantly better than a frame binding skis when comparing the two. It really does come down to expected use. If you tour 50% of the time then you are probably best to go for tech. At around the 50% area vs. 50% touring mark, it would be advisable to go for a strong tech binding such as the Marker Kingpin or the Dynafit Beast 16. While a little heavier than a Dynafit Radical or the G3 Ion techs, these tech bindings offer superior downhill performance. The Fritschi Vipec tech bindings come somewhere in the middle of the Kingpin/Beast and G3/Dynafit Radical. The Fritschi Freeride Pro offers hassle free transitions and a solid touring efficiency, yet remains downhill boot compatible and are just as easy to step into.

With 30 years on the market, Dynafit have had the tech binding world pretty sorted. Now that their historic patent has ended, binding companies such as the ever strong Marker, have been quick to jump on the tech train and we’ve seen a significant broadening of options. It’s just a matter of priorities – are you a side country specialist or are you taking it further and longer? Update: Look out for Diamir’s new Tectron binding – a step in along similar lines to the Kingpin. Your choices have never been better!

Photos from top left:  Modelling my dynafit radicals and Nancy Loves Bikes fine midweight top!  Crushing ladies release the tech heels for access to Memorial hut, Bob and Marianne model frame and tech on a recent HR, Kids can tour too – Obie and Scottie head to Crystal valley.  Obie using old tech gear of mine (dynafits and cut down skins and a pair of small boots found in a consignment store in Salt Lake City!) 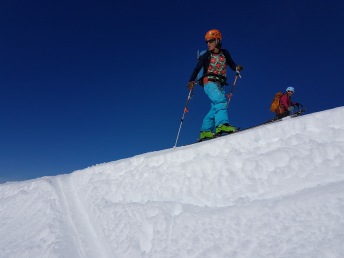 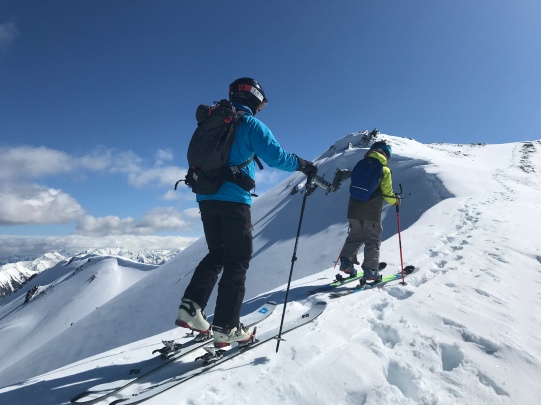