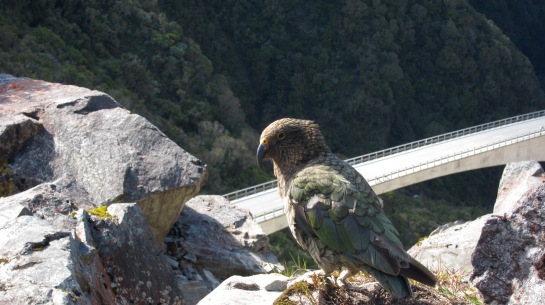 This is from an article I wrote when I was ski columnist at the Christchurch Press 2011-2014.  I’m getting really worried about kea so I’m rehashing the story.  I’m definitely seeing fewer in the mountains, despite there being a good crowd of the alpine parrots up on Avalanche Peak (Arthur’s Pass) when we went tramping last week.  We have taken to photographing and recording our kea sightings.  Here’s an example:  https://keadatabase.nz/birds/vortex

Let’s be kind to kea:
Arriving at the Porters car park last season, I got into a kid-skis-wind flummox that had me running to a side door of the car, while the back hatch was open. In that brief moment, a kea swooped into the back of the car, grabbed a Tupperware container from the lunch bag and took off with it. I chased it to no avail. The kea and his delinquent mates had done a runner.
‘‘You’re not doing yourself and your species any favours,’’ I yelled in futility, much to the mirth of others in the car park.

Yes, the charming New Zealand kea, an alpine parrot of great character and unbelievable opportunism. And bastion of alpine areas throughout the South Island.  Despite the apparent crowds of kea hassling people and facilities at ski areas, kea numbers are in decline. Estimated at a total population of between 1000 and 5000, they are threatened by habitat destruction, predation of nests, and their own curiosity.
‘‘The majority of kea at skifields are either juveniles or sub-adults[one to three-years-old] or adult males,’’ according to Tamsin Orr-Walker, of the Kea Conservation Trust. ‘‘The adult males visiting the skifield may have mates and perhaps chicks in a nest nearby [in
beech forest on ranges either side of the ski areas] and will be finding food for them.’’
As skifields become more aware of problems with kea, management have begun to take steps to ensure areas are safer for the birds. The removal of highly toxic (yet tasty)
lead nails from the roofs of older buildings has significantly reduced harm to kea but lead-building materials still exist at some ski areas. Similarly, signs aimed at discouraging feeding kea haven helped create awareness that human food is too high energy for them. Chocolate, that old standby when the going gets tough on the slopes, is also highly toxic for the birds. By feeding high-energy human food to kea, people encourage them to rely on us rather than forage in the forest. They end up with more time to get into mischief, hanging around car parks and roadways.The likelihood of conflict with people is  intensified as kea like interesting shiny objects. Their highly inquisitive nature
results in damage to property – not just to visitors’ cars but also to that of land owners.
Says Orr-Walker: ‘‘It’s important to remember that kea are neophiliacs [love all new things], so will be attracted to any new objects they see [like gloves,your lunch, bag – or passport as one tourist down south found out]. Many of these objects may not be healthy for kea to consume and autopsies have found that swallowing foreign objects has caused the death of some kea.’’
Such gregarious birds, but we need to remember that we are visiting their turf. If we want to be the only country in the world with an alpine parrot, we must take special care: don’t feed kea, keep your car doors closed (note to self here), remove all the rubber you can from your roof-rack, don’t leave things lying around in the car park, clear your table immediately if eating outside, and tell kids and others to do the same.  Pick up cigarette butts!  Do I even have to say this!
Let tourists know that kea are a threatened species and that we lessen the bird’s chance of survival by leaving tempting objects lying around.
It’s like your mother told you – pick up after yourself.  Go further and pick up after others too.  That way, the alpine parrot of great brazenness and curiosity has a greater chance of thriving.
❏ For more information see
keaconservation.co.nz.

Valerie:  A fledging female.  She’d been reported as having a broken leg but when we saw her last week (Otira valley), her leg seemed fine.  It was good to be able to help to identify her via her band and report on her good health.  Anyone can do this when they see kea.  Just record the band colours and number and report via keasightings@gmail.com