For years I’ve wanted to go and guide on the Antarctic Peninsula and South Georgia Island.  From March 5-27 the dream came true as I got a job with Aurora Expeditions out of Sydney.  I joined the Polar Pioneer, a St Petersburg based ship and it’s Russian crew of 22, for a three week trip from Ushuaia – Antarctic Peninsula – Elephant Island – South Georgia Island and finish in the Falkland Islands (aka Islas Malvinas if you are Argentinean).  Aurora has offered a “Follow the Footsteps of Sir Earnest Shackleton” journey over the past two years to celebrate the “glorious failure” but incredible survival in his heinously unsuccessful attempt to cross Antarctica in 1916.  Our crossing of South Georgia Island would (kind of) follow the final footsteps of Shackleton’s epic journey.

I was to go last year but the sad demise of my dad meant that I ended up in NZ instead and Jane Morris (fellow Kiwi chick guide) replaced me.  In an odd turn of events, Jane broke her arm badly and was not sufficiently recovered; Thus the tables turned for 2017.

Scott was preparing to go to Everest for about the 5th time (I’m not even sure!) so it was hectic in the Simper-Keeling household and we actually missed each other.  Everyone asks: “what about Obie?” but if you know Obie then you know that he’s a versatile boy who is happy to stay with friends.

I’d not been to Argentina or Chile before so enjoyed transit days in both Buenos Aires and Santiago on access and egress as well as setting off from Ushuaia and arriving to the Falklands…. all new and interesting.
The Polar Pioneer is a 75m steel ship, built (obviously) for the Polar regions.  We had about 45 passengers and 4 of these had signed up for the South Georgia Island crossing.  We were a geographically varied team – Phil Penney (old friend from NZ) and I as guides, Eamonn from Ireland, Tats from Japan, Sheona from England and Peg from Colorado.  Everyone was super fit and into it and we enjoyed some great climbs and a lot of ribbing and laughs.

I also hugely enjoyed my fellow staff – the Expedition Leaders Stephen and Anna (both from Oz), Naturalists Heidi (Canada/Oz) and Marilou (Falkland Islands!), historian Alisdair (Oz), Hotel manager Justine (NZ/Oz) and Leila (Argentina).  I hope I get to go again!!

I wrote an account for the ship paper about the South Georgia crossing:

Stephen, the Expedition Leader, positioned us climbers perfectly in terms of weather.  The SE gales began to ease on March 17 as Marilou dropped us on the shores of King Haakon bay.  This is where Shackleton and his four men alighted after their desperate 800 nautical mile journey from Elephant Island in the 20 foot wooden lifeboat, the James Caird .  Clouds scudded for the brisk 2km walk over glacial moraine to the glacier toe.  Roping up, it was a steady 300 metre/5.5km climb to Shackleton gap and view into Possession bay.  The plan was not to set out on the full trek this day, instead opting for a fairer forecast the following (an option obviously not available to Shackleton and his men!)  We gazed into Possession bay, less than an hour’s stroll away.  An overnight boat ride around the Northern tip of the Island would let the storm die out completely and set us up for best success.  The next morning  dawn spread it’s shining perfection into Possession bay.  Shackleton had crossed to Possession on the initial part of their trip so the start of our trek would look somewhat similar to his (our modern gear, our half start and a half wheel of brie notwithstanding).

The first disembark point was vetoed due to an actively calving glacial face and Marilou (our trusty zodiac driver for almost every one of our trips) dropped us on a beach below Shackleton gap.  Our trail came within 200-300m of our track the day before.  The two rope teams angled toward the Tridents – a series of 650 metre black rocky peaks that are generally agreed to be the crux of the journey.  Firm ice conditions made for fast travel as we cramponed crisply in the morning sun, shouting joyously on occasion that we were finally making this historic trip.  On the East side of the Tridents, Shackleton, Crean and Worsley made the infamous bumslide in the dark.  We sweltered under hot sun and descended via the lowest point – a steep, narrow glaciated gully that compressed just enough to allow safe zig-zag passage through crevasses.  On the lower section, in an attempt to emulate the Shackleton experience, we slowly bum-slid toward Crean camp.  The snow was thick and slow like mashed spuds.  For momentum I ran down the slope pulling Sheona and Peg behind me.

Stopping for lunch at Crean camp, we scoffed quarter of the brie wheel with crackers.  The Crean camp is on a lateral moraine above Antarctic bay and from it, we had a clear view through to our next objective, the Nunatak, 450 metres higher and 9km away.  There followed a fairly nasty section weaving through an old and tired blocky section of glacier.  Alternately balancing on ice stacks then mushy snow, the odd person (mainly the guides) stumbled through hidden crevasses.  Seeping wetness eased unpleasantly  into socks.  A long hot push into the afternoon took us back to 550 metres and we stopped to camp on a rocky shoulder opposite the Nunatak.  Sunset from our eyrie flooded us in a diffuse gold light as tents were positioned and hot soup consumed.

A slightly cold and uncomfortable night for us was nothing compared with the all-nighter that the Shackleton team endured in late May 1916.  We woke at 5.  I had set our stove in the tent vestibule and it was a simple thing to light from my sleeping bag for several nice hot cups of tea before trekking out at 6.20am.  Grey wispy clouds obscured nearby peaks but looked like they’d burn off to another glorious day on South Georgia Island.  We crunched down the Fortuna glacier in our usual two rope teams –  ladies on one rope, gents on the other.  I wondered at our wide trajectory to the north but all was revealed as the glacier rolled into a low angle icefall.  A fabulous section through serac (blocks of ice) corridors had cameras clicking as we wove into the glacier and emerged at the “Fortuna Pinch”.  This secret route was figured by guides before us and passed on by GPX file (to our GPS), making  for an aesthetic and fast route to the lower Fortuna glacier.

Fortuna bay sparkled below as we finished the morning’s 10km trek with hours to spare.  Finally we could take the ropes off and a small celebration ensued; The billy was boiled and Eamonn’s magic green bag of chocolate treats was produced.  Last: a simple stroll through the terminal moraine to the beach.

A feature of the climber journey to both the Peninsula and South Georgia was our constant-seeming sprint from ship to shore, quick changes from gumboots to climbing boots, harnesses and crampons and mad dashes to climb a peak within the timeframe of Polar Pioneer stops.  We arrived at Fortuna hours ahead of schedule and were able to finally relax on a beach in the sun and watch wildlife.  King penguins eyed us curiously.  Fur seal pups bounded in and out of the water; Sometimes growling, sometimes chasing us; Fat, lazy sea elephants dozed and moulted on the beach, occasionally scratching themselves with surprisingly supple fins.  Idyllic.  Eamonn dozed off at one point and woke to find himself surrounded by fur seal pups.

Marilou and Stephen scooped us by zodiac; We had a heartening welcome back onboard the PP, a quick lunch then boots back on for the walk to Stromness with all of the other passengers and many Russian crew.  Big packs were jettisoned  and we merrily chatted our way over the hill to Stromness to the now-dilapidated whaling station that had welcomed Shackleton, Crean and Worsley back in 1916.

Over the three days we hiked a whisker under 47km with 1360m of elevation gain and loss, mostly on glaciers.  The weather was unbelievably perfect for an island that receives rain 300 days a year – calm, clear with travel conditions as good as you can get. We savoured the well-filled crevasses and good firm ice travel.

South Georgia crossed, the team settled into ship life and joined excursions to the north side bays of South Georgia –  the old whaling station – Grytviken and some other glorious spots – Gold Habour, Hercules bay and maybe some others that my simple mind has lost already.  Glaciers spilled to the beaches crowded with seals, penguins of all kinds, sea elephants and the stealthy skuas and other opportunistic birds (some of the group watched a penguin chick get chomped right from it’s parents).  At sea we were followed by several species of albatross, prions and various types of petrel.  We’d go to the bridge and watch for hours.

If you read this and feel an inkling of keenness, let me know.  I want to go back to both the Peninsula and South Georgia and I also want to ski there!  October-November would be best for skiing but March works for climbing. 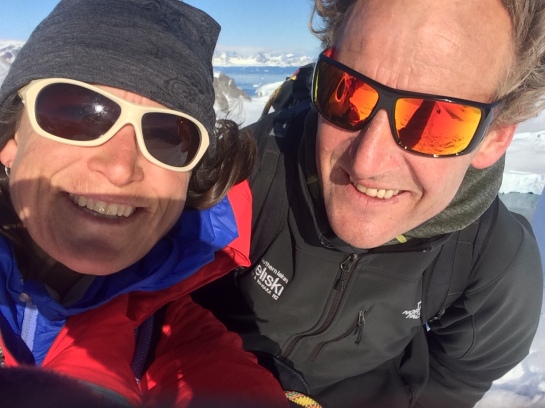 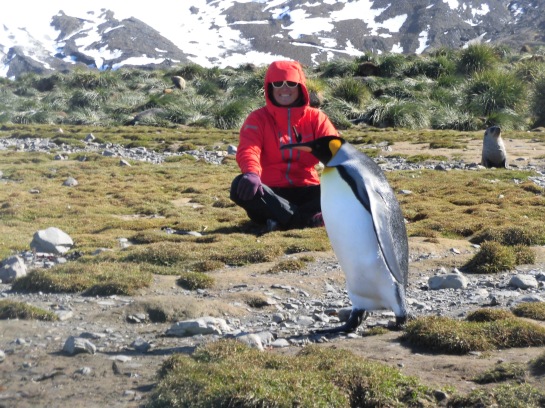 Me and my friends of Fortuna bay

Polar plunge (had to be done)

Marilou releasing a prion (the naturalists are super vigilant about trying to prevent bird strikes on board). Marilou grew up sailing this area with her parents and brother. A remarkable 23 year old!

Russian crew on the Stromness hike